You’re suffering from tinnitus and you’ve heard of this new treatment called Lenire. You’re wondering if it might be right for you. You might have found the Lenire thread on our support forum Tinnitus Talk but gotten discouraged at the thought of reading 7.000+ posts. You just want a quick, easy and, most importantly, independent assessment of this device. That’s why we compiled this article for you.

The tinnitus treatment device called Lenire® was launched by Neuromod Devices in June 2019. It has been the only serious attempt at a new tinnitus treatment of the past few years – ignoring of course the plethora of obvious scam products hitting the market every day.

Lenire is based on “bimodal neuromodulation” technology, which means stimulating two neural pathways simultaneously. In the case of Lenire, we are talking about sound stimulation through headphones at the same time as the trigeminal nerve being stimulated through electrical pulses to the tongue.

How to Get Lenire?

Lenire is only available by recommendation from an appropriately qualified healthcare professional. The device is currently offered through clinics in Ireland, Germany and Belgium. Whereas several visits to one of the clinics were previously required, due to the impact of COVID-19, Neuromod has been offering remote appointments for residents of Ireland and other EU countries since June 2020 from its clinic in Dublin, thus removing the need to travel.

Neuromod applies a pre-treatment screening, so beware that you may be told during/after your first appointment that you are not eligible (for instance due to severe hearing loss).

The device is priced at a steep EUR 2.500 – which is currently not covered or reimbursed by any public healthcare schemes.

How Was Lenire Tested?

The tinnitus community has long awaited the release of clinical trial data to support Neuromod’s claims about Lenire’s benefits. A group of researchers published their analysis of the company’s TENT-A1 trial in Science Translational Medicine (STM) – a highly regarded and peer-reviewed academic journal – earlier this month. You can find the article here.

It’s clear from the STM article, and the previously published trial protocol, that we are dealing with a clinical trial where the methodology is clearly described, the sample size is adequately large, outcomes are reported in detail, and long-term follow-up of participants was conducted. Such rigor has been sorely lacking in many tinnitus studies for the past few decades; hence, we applaud Neuromod for its diligence in this regard. However, we also identified some weaknesses in study design and reporting, which we will discuss below.

This is of course the million dollar question. Neuromod summarizes the results of their trial as follows: “86% of treatment-compliant participants experienced an improvement in tinnitus symptoms after 12 weeks of treatment.” This sounds promising at face value. But we have some caveats to the clinical trial results as reported in the STM article:

That might seem like a lot of criticism, considering that there are other tinnitus treatments on the market with much poorer supporting evidence. That is true, and trust me, we would love to conduct comprehensive reviews of all those treatments (and maybe we will). But as a small volunteer organization, we have to focus on what is currently new or generating interest. What is more, we are confident that the last word has not been spoken on bimodal stimulation. More data will come out, new players will join, treatments will be tweaked. So, we certainly hold out hope, but for now would not consider Lenire a breakthrough.

Is There Any Independent Study on Lenire?

Tinnitus Hub has conducted its own, independent, patient-led study on Lenire. 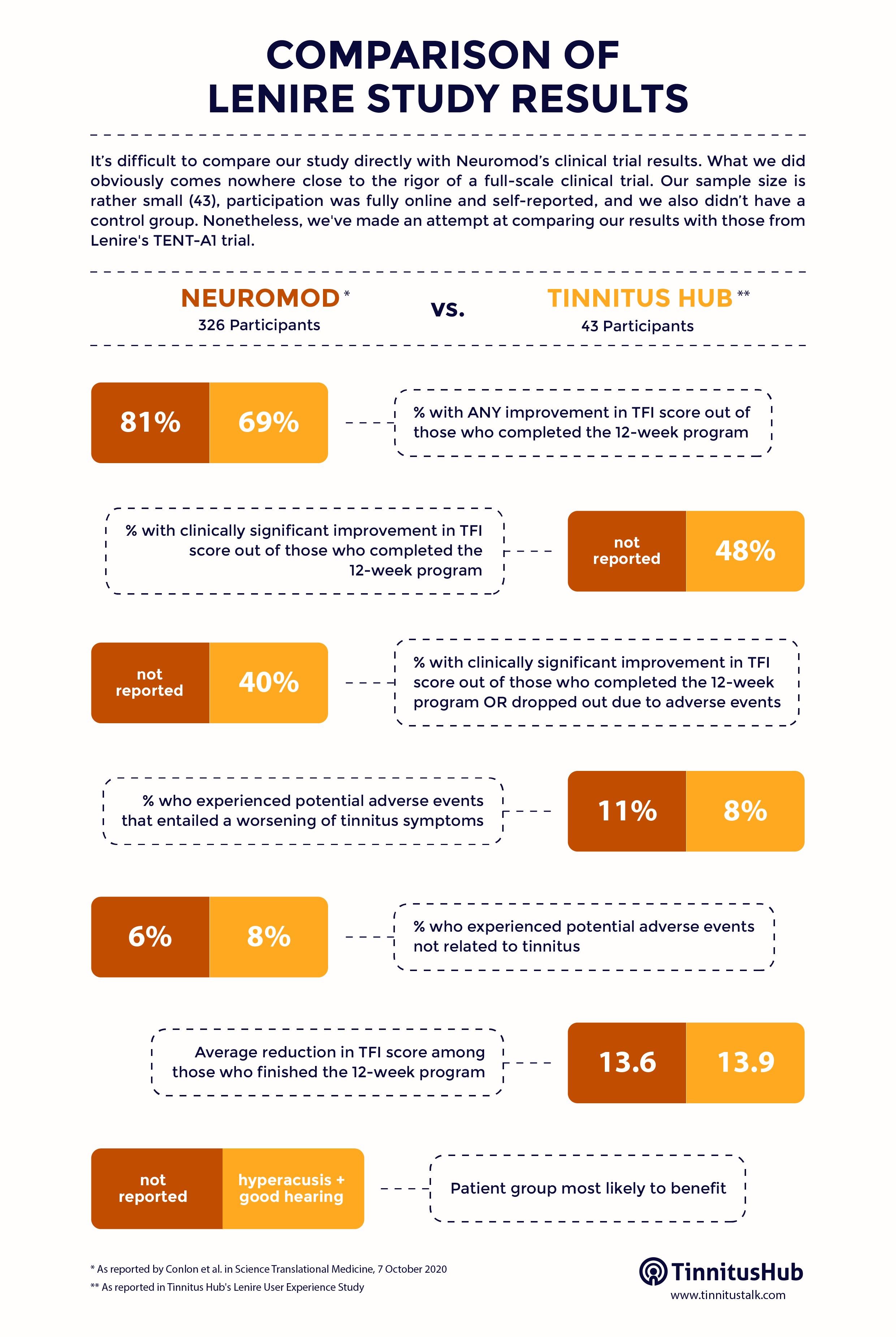 Please check here (PDF) for more details on the calculations behind this table.

Should You Buy Lenire?

There is no straightforward answer to that question. In our opinion – based on the currently available evidence – Lenire is not proven to be meaningfully more effective than (a combination of) existing treatment options such as sound therapy, hearing aids and counselling. We await and welcome more evidence on the efficacy of the device, and in fact Neuromod has assured us that more evidence is coming.

Nevertheless, it is clear that Lenire certainly might benefit some tinnitus patients; so, you will have to decide for yourself whether it could be right for you. Consider the following:

If you decide to give Lenire a try, don’t forget to tell the rest of us how it worked for you!

* Please note that we are talking about potential benefits regarding your tinnitus symptoms; there is no evidence that Lenire improves hyperacusis in any way.

Help Us Continue to Inform You

This blog and the additional resources below are the result of literally thousands of hours of volunteer labor conducted by people who suffer from tinnitus, just like yourself. Please help us to continue to deliver the independent resources you seek, by making a donation of any size.

What do Lenire users say?