On the 16th of January 2020, I had the honour to represent Tinnitus Hub at the Manifesto Roundtables, organised by the British Tinnitus Association (BTA) and hosted by Sir John Hayes, MP for South Holland and the Deepings and also a tinnitus patient for over 30 years. 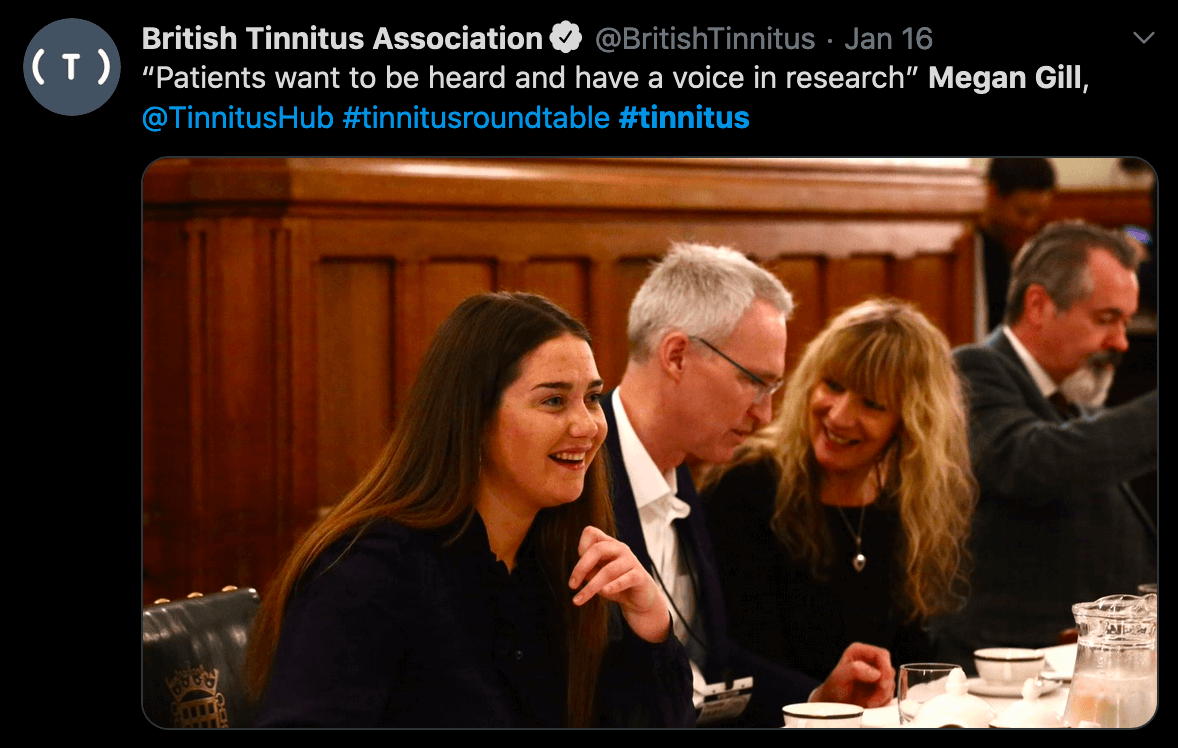 There was little detail provided as to what to expect beforehand, which made preparation a little tricky. But as this was a BTA hosted event, I made sure, along with the helpful advice of David Stockdale, to read up on “Tinnitus services in the United Kingdom: a survey of patient experiences,” the “Economic evaluation of the Healthcare cost of Tinnitus Management in the UK,” and “Why Is There No Cure for Tinnitus.”

The aim of the event was to bring together researchers, tinnitus patients, representatives from health institutions and research funders. The idea was to discuss and debate how we can push the search for a tinnitus cure forward.

The key topics to be discussed were:

– The current state of tinnitus research
– What people with the condition want to see
– What the research priorities should be
– What are the practical things needed to make that happen?

I was sitting at a table which was chaired by Nic Wray (Communications Manager at the BTA) together with:

How Do We Help Patients?

One of the first questions posed was “How do we help patients?” This was initially directed at the representatives of the patient organisations at the table, all of which had tinnitus. There were some brief discussions around reviewing more research into cortisol reaction. However, it rather quickly turned into a discussion about how to better educate local GP’s on the matter. Albeit a very fair and relevant discussion point, as a person with tinnitus, I did find myself thinking that the trajectory of the conversation deviated from the point of patients being heard when they ask for help. To me, this seems illustrative of the disconnect between medical workers, researchers and the patients’ voice. So, I pointed out that while educating healthcare professionals is worthwhile, as patients we want to be heard. The patients’ voice is an underutilised source of information that should be shaping the course of research.

Next, the discussion shifted toward the researchers at the table to provide an overview of ongoing tinnitus research and priorities. There was an unanimous agreement that a cure would be the priority but also a very honest revelation that as of now nobody actually knows where this is going to come from. This led to a discussion around the interdisciplinary nature of searching for a cure and the difficulties that presents. The BTA were noted to be making a great effort of bringing stakeholders together (my own view and comment was that the roundtable itself was a stellar example of this) to move forward.

Nevertheless, the reality is, there are so many avenues to take and explore that nobody really knows until we keep ploughing through and conducting as much research down as many avenues as possible. 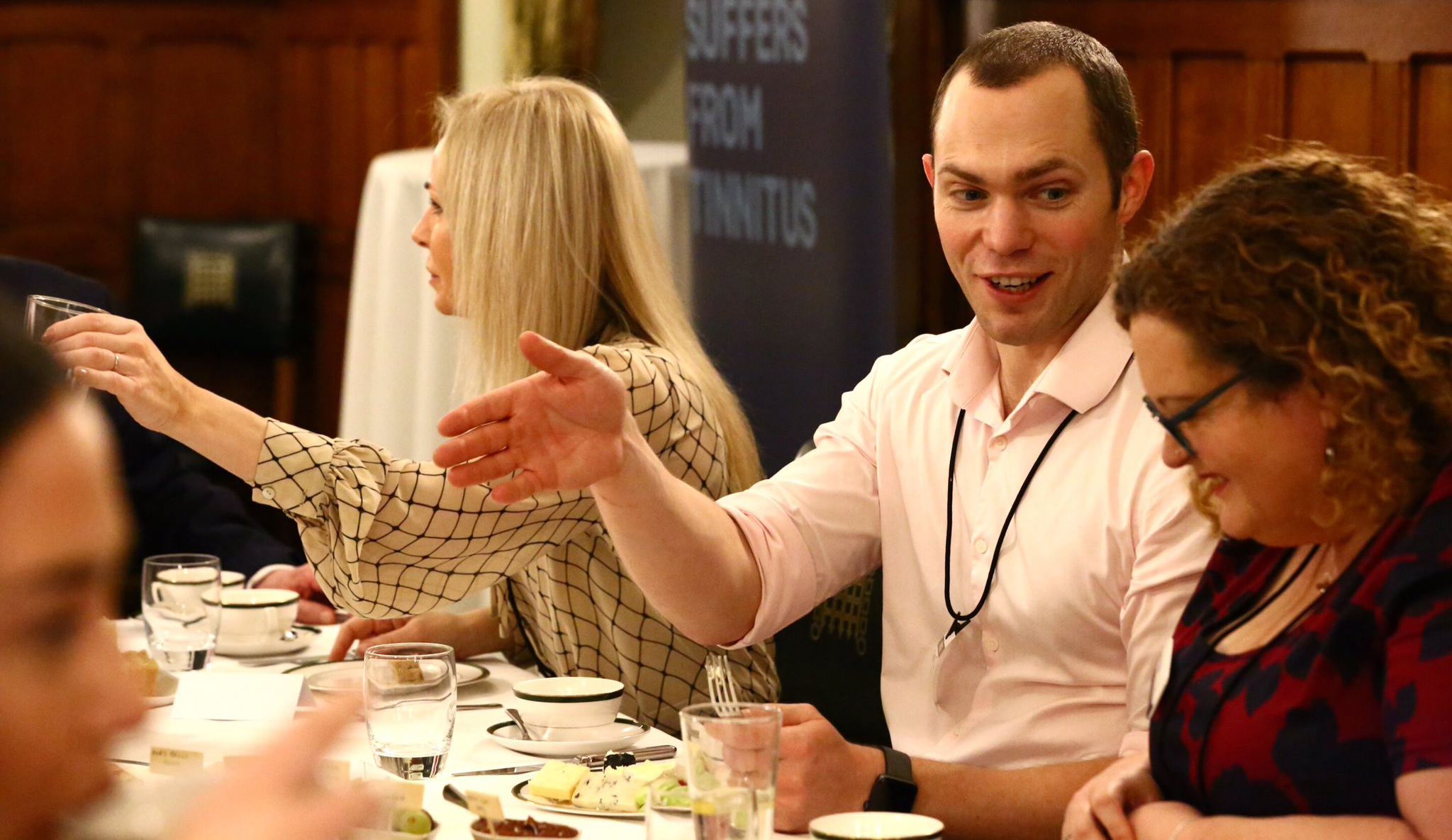 Subsequently, we moved to a very interesting discussion around sub-typing. Dr. Will Sedley posed what I found to be a very interesting model regarding the difficulty around sub-typing. It hinges around the question of whether or not the pathways (sub-types) emerge separate to one another or whether they share a similar root and then branch out to different sub-types. This is a point of contention amongst the research community and it was widely agreed that we seriously need more funding and research into defining sub-types.

Another discussion point around tinnitus research was the difficulty in finding a way to measure tinnitus objectively. Dr. Will Sedley presented his ongoing research on this matter, which while a little too technical for me to relay, centres around the way our brains predict sounds. The outcomes of this research will be quite significant and will hopefully generate a wider interest in tinnitus research. An objective measure tinnitus will allow researchers to study the condition in a, for lack of a better word, “scientific” way, rather than attempting to measure the sound subjectively, which is often shrouded in patients’ emotional perception.

The Need for a Biobank

One pain point discussed around tinnitus within the UK specifically was the absence of a register or biobank for people with tinnitus. While we at Tinnitus Hub offer something similar to researchers by providing them with access to patients and patient data, there is no verified database in the U.K. for researchers to access. Such a database would allow researchers to filter by age, gender, type, medical history, cause, willingness to take part in trials etc. They could then look for objective markers of tinnitus and generate meta-data, which we could in turn use to lobby for more funds and cure-focussed research. The fact that this does not yet exist reflects, in my opinion, the lack of attention and seriousness tinnitus receives on a national and governmental level. Once again, everyone at our table was in agreement that this would be a worthwhile cause and that a Tinnitus Biobank would get us closer to a cure.

In keeping with the theme of research, there was a brief and somewhat untapped discussion around the extent to which the research community collaborates. This is something I would be further keen to understand. While there are worthwhile research consortiums like ESIT and TIN-ACT, it was noted that geographically speaking there is still a disconnect between different parts of the world. 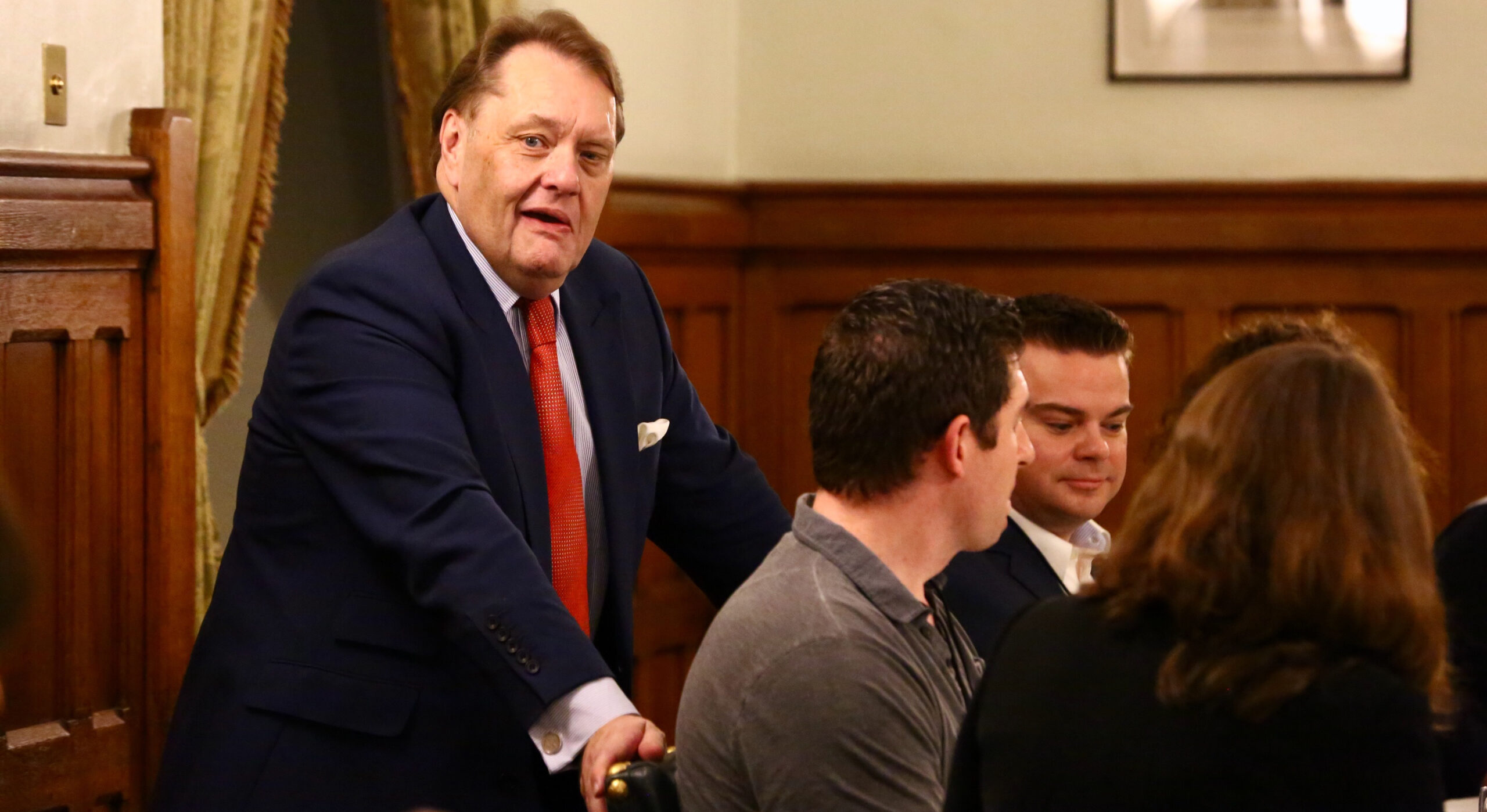 How Do We Create More Interest Around Tinnitus Research?

Personally, I respected the blunt honesty of this, and it is a point that has remained in my thoughts since. So I flagged this during the roundtable discussion and also brought up the passing of Allan1967 (a long time member of Tinnitus Talk) and the fact that 1-2% of the population is debilitated due to tinnitus and the variety of mental health issues that we face. Of course, we can’t always directly link or find a correlation between, for example, suicide and tinnitus, or even anxiety and tinnitus, but nonetheless I think I can speak for a lot of us that we feel this should be, for lack of a better word, “marketed” to both the general public and researchers, specifically in an era where more public figures are speaking out about their struggles with mental health.

The reactions to my comment varied, from those with tinnitus agreeing to researchers pointing out that in their careers, while they have experienced patients dying by suicide and could correlate that with their tinnitus, the percentage is still rather small. Someone else pointed out that the heterogeneous nature of tinnitus and link to mental health issues could actually put pharma companies off investing in drug treatments, due to the complications that could arise.

There was another discussion around medical education and tinnitus, and it was noted that tinnitus simply is not on the curriculum in during healthcare education, therefore, how can many people even know about it as an avenue to pursue in their career?

In relation to the UK there was a brief discussion around the work Anne Savage is doing around preventative issues within the DJ community, and also about how we could work with veterans to promote tinnitus awareness among the general public.

A final interesting question posed was: “Where would the money be spent if we got more?” It was agreed upon that creating a registry of verified patients and an infrastructure around patients and research would be the best place to start.

Therefore, it was agreed that any political lobbying efforts should call for:

– A registry or biobank of patients in the UK to be established.
– Awareness at government level on the distress that patients feel.
– Better tinnitus prevention (e.g. stricter penalties on venues that ignoring decibel limits).

Going forward: The BTA will put together a Research Manifesto, based on the inputs from the roundtable discussions, to give the government ministers something to lobby with and also to share amongst all of our communities.

First and foremost, I must say that it was an absolute honour to be able to represent Tinnitus Hub and the Tinnitus Talk community at this event. I realise that a lot of regular posters on the Tinnitus Talk forum do not necessarily know who I am, as I typically shy away from posting on the site. I am however an avid reader of threads and started actively contributing in any way that I can with Hazel and Markku behind the scenes over the past two years. Reading through Tinnitus Talk has helped me on some of my darkest days about 5 years ago and I owe a lot of former and current posters here a big thank you.

I prepared for this event during the holidays that also marked my 10-year anniversary with tinnitus, which allowed for some deep reflection on the impact it has had on my life and how I have felt as a patient for these 10 years. Similar to many others, I was shipped off from my ENT and told to just deal with it, as a 17-year-old dreaming of a career in sound engineering. In any case, being an optimist by nature, I found a way to deal and live with this, eventually and most recently becoming thankful of the emotional resilience I’ve gained because of my tinnitus.

Prior to this event I never allowed myself to really believe that there could be a cure, or that there were people out there that actually cared enough to make things happen. Now I feel differently. When I left the House of Commons I genuinely had to stop, pause and take a deep breath and reflect on the feeling I had. Sitting at that table, next to another table with individuals who have a lot of power and care to make things happen, in the company of members of the public who have tinnitus and feel the same way I do day-to-day, was a powerful experience, and one I wish everyone reading this could experience that too.

We may not have a cure yet, or even in my own lifetime, but do know that there are some wildly intelligent people out there trying and committing their lives work to build a better structure and outline as to how we can work together to find a cure.

I hope to have relayed this in the clearest way possible and apologies if there are any gaps in information. If you have any more questions, please don’t hesitate to reach out and ask me. I do apologise in advance for any delays in responding as I have a very demanding day job.